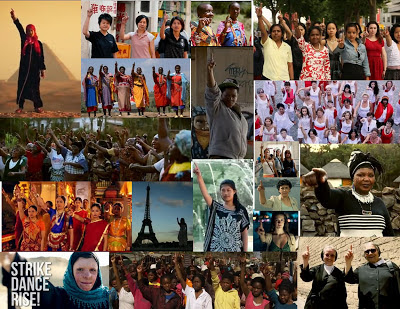 An Afghan woman holds a banner during a march calling for end of... ((AP Photo/Musadeq Sadeq))
KABUL, Afghanistan—Dozens of Afghan activists and supporters marked Valentine's Day by marching in Kabul on Thursday to denounce violence against women amid reports that domestic abuse is on the rise.
Afghan women have made great strides in education and official circles since the days under Taliban rule, when they had to wear all-encompassing burqas and were not allowed to go to school or leave their homes without a male relative as an escort. But they still face widespread domestic violence, forced marriages and other problems.
"Violence against women has to be eliminated or at least reduced in Afghanistan," rights activist Humaira Rasouli said after walking from the landmark Darul Aman Palace just outside Kabul to an area in the city near parliament. "Unfortunately ... the violence against women rate is increasing day to day." Organizers said some 200 people, men and women, participated in the march, which was planned by several Afghan rights groups as part of a global domestic violence awareness campaign called One Billion Rising.
Past protests supporting women's rights have been attacked by hecklers and men throwing stones, and riot police with helmets and shields stood guard on Thursday.
Underscoring the security concerns, protesters had badges and the public was not invited to join. But the march remained peaceful and many women welcomed the support of men along the way.
"It was very successful because usually protests don't get so many people," said Manizha Wafeq, one of the organizers.
In August 2009, Afghanistan enacted an Elimination of Violence Against Women law that criminalized child marriage, selling and buying women to settle disputes, assault and other acts of violence against women.
But a U.N. report issued late last year found that Afghan women still face frequent abuse despite an increase in the prosecution of abusers. Violence against women also remains largely under-reported because
of cultural taboos, social norms and religious beliefs in the conservative Muslim society.

Examples cited in the report included a woman strangled by her husband because she gave birth to girls instead of boys and a 15-year-old girl who filed a complaint about repeated beatings by her husband and father-in-law only to be told by prosecutors to withdraw it or risk imprisonment herself.
In July, some 50 women and men also took to the streets of Kabul to protest the public killing of an Afghan woman accused of adultery. A video of her gruesome, execution-style killing showed the woman being shot multiple times in Parwan province, north of the Afghan capital, as people stood nearby, smiling and cheering.
The Afghanistan Independent Human Rights commission also recorded more than 4,000 cases of violence against women from March 21 to Oct. 21 last year, but most were not reported to police.
"Women don't have a bright future and the government isn't doing enough to protect them," said Faryaa Hashimi, a 20-year-old student at the march. "We are calling on the international community and Afghan government to protect the women."

An Afghan woman holds a banner referring to a global domestic violence awareness campaign called One Billion Rising during a march calling for the end of violence against women, in Kabul, Afghanistan, Thursday, Feb. 14, 2013. Dozens of Afghan activists have marked Valentine s Day by marching in Kabul to denounce violence against women. Concern has risen after rights organizations last year found that Afghan women are frequently victims of violence despite a law against it and increased prosecution of abusers. ((AP Photo/Musadeq Sadeq))

Afghan women carry a banner during a march calling for end of violence against women, in Kabul, with the Darul Aman palace seen in the background, Afghanistan, Thursday, Feb. 14, 2013. Dozens of Afghan activists have marked Valentine s Day by marching in Kabul to denounce violence against women. Concern has risen after rights organizations last year found that Afghan women are frequently victims of violence despite a law against it and increased prosecution of abusers. ((AP Photo/Musadeq Sadeq))